Is it already a year since we hosted the 404 Ink/Interrobang‽ War On Xmas party?

Congratulations to our pals at 404 INK, who won the Saltire Society’s Emerging Publishers of the Year for 2017 last night. We’re sure you’ll all agree that it’s hugely well deserved.

And congratulations to us for having the opportunity to host the launch of 404 Ink Issue 2: POWER in Edinburgh this coming Friday, 8 December. The mag includes work by Interrobang veterans, pals, and known associates Andrew Blair, Ever Dundas, Rebecca Raeburn, Ross McCleary, and Stuart Kenny, so we can’t wait to encourage people to get it in their hands.

The launch party for 404 INK’s Issue 3: POWER takes place this Friday, 8 December from 7pm at Summerhall. Get your tix here while you can.

The nights are drawing in, and that can mean only one thing.

Yep. INTERROBANG‽ have recovered from our first birthday celebrations and we’re back with  brand new show! We’re teaming up with Poetry AF to create something a bit different. And it’ll be like nothing you’ve ever seen before… END_OF_DOCUMENT_TOKEN_TO_BE_REPLACED 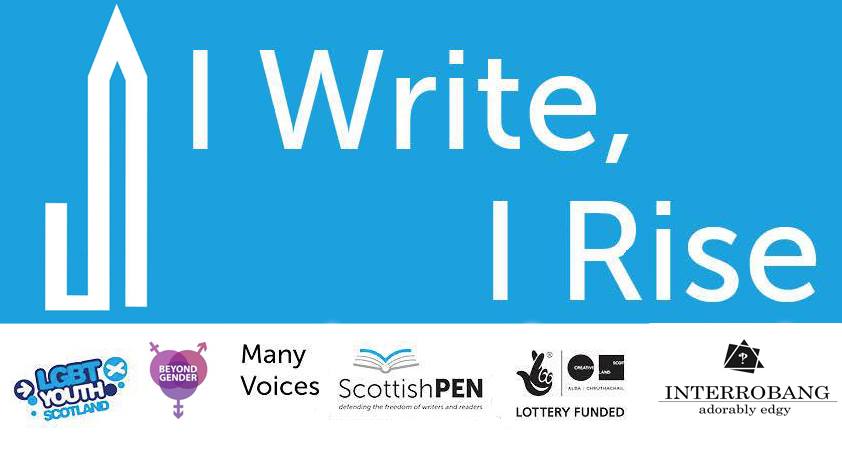 INTERROBANG‽ are very happy to announce that we are taking on a co-hosting and -production role in an evening of trans and non-binary performance organised through LGBT Youth Scotland and Beyond Gender as part of Scottish PEN’s Many Voices project that aims to amplify voices that are silenced and marginalised.

As well as young people who have taken part in the I Write, I Rise workshops with Nat Raha, the evening with feature US-based writer, speaker, activist, teacher and poet Eli Clare.

We’re proud that the INTERROBANG‽ audience is recognised throughout Scotland and beyond for its generosity and supportiveness, so if you’d like to join us at the Scottish Poetry Library at 6pm on 9 September, please head over to the Eventbrite page to register.

For the next seven days, it’s going to be all HINGS all the time here at interrobang.scot!!!

Interrobang Season One may be over, but we’re hosting a very special event on Friday, 28th July – THE EDINBURGH LAUNCH OF CHRIS MCQUEER’S HINGS!!!

We reckon Chris has assembled got the best line-up of live lit you can see in Scotland this year, and as much McQueer as you can handle. It’s going to be a book launch like you’ve never seen before.

Chander! You can’t sleep through this!!!

And that’s not just a promise, that’s a threat. So. Already got your copy of HINGS from 404 INK or a good bookshop near you? Then book a free ticket via Eventbrite.

Not got a copy of HINGS? Book a £3 ticket, also via Eventbrite, and enjoy a discounted £5 copy of Chris’s awesome debut.

Not convinced yet? Then check out what the experts are saying:

This might be my favourite Praise For quote ever pic.twitter.com/QqEIieZDyd

Just two more sleeps until We Are Watching, and the Interrobang crew are getting increasingly excited! Ricky absolutely refuses to calm down.

Indeed there is, ancient references’ Jimmy Cricket! We’ve got brilliantly on-point music from SUPER INUIT! NIK WILLIAMS is going to talk about why we should all care about our surveillance society!! And there will be Live! Art!! HAPPENINGS!!!

And possibly humour, and prop-assisted storytelling!!!!

So get along to the Bongo Club’s event page and secure your ticket – don’t miss the excitement!

Our upcoming gig in association with Scottish PEN at the Bongo Club is a really important one to us, so we’ve asked Nik Williams, Policy Advisor at Scottish PEN, to explain why and share a few words a few words about their Surveillance campaign.

Are we free to write if we are being watched? As surveillance increases, as the state legislates for sweeping powers that enable them to see our web browsing habits, who we communicate with and seek to remove encryption from our most sensitive conversations, Scottish PEN ask, where does this leave the right to free expression in the UK? Scottish PEN has been opposing the Investigatory Powers Act for the last 18 months as it demonstrates a distinct threat to how we can communicate, share information, research and take part online free from the prying eyes of others. We do not believe pervasive surveillance powers are compatible with our human rights protections that enable everyone, irrespective of background, belief, gender, income, race or ethnicity to fully realise their fundamental freedoms.

Privacy is not an out-dated human right, it ensures we can all cultivate a space, however small, that we can call our own, where we can create and form the ideas that shape our identity and place in society. Suspicionless surveillance undermines this space, leaving nowhere for us to call our own and without this space how can we be sure what we create, who we communicate with and what we share with others is truly of our own making free from outside influence?

Thanks a lot to Nik for that. You can read more of his thoughts on surveillance and what is now the Investigatory Powers Act 2016 in The Herald.

It’s been one heck of a time since our last regular INTERROBANG?! event.

And some grimmer stuff, as well.

So, come bury your head in the sand with your hosts BETH COCHRANE and RICKY MONAHAN BROWN and Edinburgh’s greatest living writer of the volunteer-perfomed, two-handed, comedic playlet, JACQUES TSIANTAR, as the very slightly naughty, Saboteur Award-winning INTERROBANG?! returns to the Biscuit Factory for an afternoon of storytelling, creative non-fiction and music, possibly with a small side of teeth-gnashing and farmer-bothering.

• JEN MCGREGOR is an Edinburgh-dwelling Dundonian raised by Glaswegians. Her plays have appeared at the Piccolo Theatre in Milan, the Traverse, and the Festival Castel dei Mondi. She has been published by New Writing Scotland, Bare Fiction, and 404 Ink.

• BECCA INGLIS is a creative non-fiction writer and theatre reviewer based in Edinburgh. Her essay Love in a Time of Melancholia appeared in 404 Ink’s collection Nasty Women, and her article When Women Steal the Patriarchy’s Toys: Feminism as Terrorism was published by the Dangerous Women Project. Becca has also blogged for Hollaback!, Linguisticator, and Lunar Poetry.

• JONATHA KOTTLER is from Albuquerque, NM where she was a lecturer at The University of New Mexico. She is a happy member of Edinburgh’s Write Like A Grrrl community and runs a reading and writing group for the local charity ECAS. She read a piece at Story Shop in the EIBF 2016, has an essay in 404 Ink’s Nasty Women, and has written for The Guardian.

• THE DIRTY LIES are a Scottish alternative group whose influences include Can, Radiohead and The Velvet Underground. Their guiter-laden sound is infused with synth noise, electronic drums and jazz. Blurring the line between indie and electronica, they have been steadily making a name for themselves in the Lowlands following 6 Music airplay with their debut EP, Release, and followup Cellophane. Their live set is raucous and expansive, while embedded with delicate harmonies. “It’s all about good tunes, tight playing, a real sense of dynamics and a walk on the dark side” – John Robb, Louder Than War.

Suggested £5 on the door.
(*Wheat not included.)

We enjoyed the INTERROBANG: A New World?! show so much, we wanted to keep shaking things up for the new show. So here’s the skinny on Lost In Space?!

Never fear, we have the traditional line-up of awesome writerly talent:

As well as all that, we have the awesome AURORA ENGINE and MATT NORRIS bringing the choons. We’ve been angling to have them both in for a while, and having them both in the same bill is gonna be incredible!

But, wait! There’s more?! If you can’t take the Bing Crosby/Walt Disney joke again, we present an actual, honest to goodness comedian.

And of course, the theatrical stylings of our resident short-form playwright, JACQUES TSIANTAR and his notorious JACQUES’ BIG TWO-HANDER! Will YOU be one of the volunteer actors who gets to be Edinburgh-famous for fifteen minutes?!

We’ll be releasing some awesome Interrobang Interrogations with our guests this week, but for now, know these further exciting developments:

We’re looking forward to seeing you!